Welcome to Lauda Restaurant in Oia, experience the Santorinian tradition along with international culinary trends

Long before Santorini became known as one of the world’s most popular destinations, Oia was a small village with 306 inhabitants, located at the northern edge of the caldera. Lauda, built on this rock in 1971, was the village’s ﬁrst restaurant. It was the place where the locals gathered to talk and drink, the place with the village’s only telephone.

Today, Lauda Restaurant is commited to honouring the history and tradition of this unique place. Equipped with exceptional local ingredients and our devotion to the volcanic soil, the native grapes, the aromas and the colours of Santorini we strive to oﬀer you an authentic gastronomic experience. 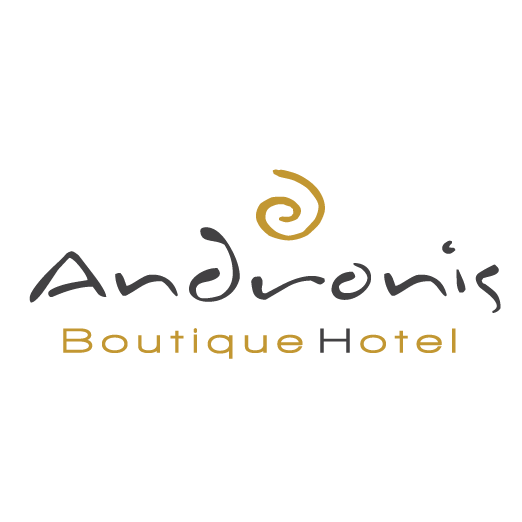 A charming flight of stone steps is all that stands between you and your dream holiday. Carved into the dramatic crescent cliff of Santorini, the luxurious Andronis Boutique Hotel offers breathtaking views to the infinite blue of the Aegean from every suite. The raw power of the volcanic eruption that shaped Santorini thousands of years ago created an island steeped in history and culture, a place of romance and serenity that tempts you to unwind and revive in its warm embrace.

The hotel’s multi-level suites capture the hypnotic vistas out over the caldera and the picturesque white-washed houses of Oia. Private terraces with Jacuzzis tempt you to linger over the views, with every five-star comfort provided in the suite for a memorable stay.

Soak up the hot Mediterranean sunshine, cool off in the hotel’s two pools and sample a refreshing cocktail as the stars come out.

Emmanuel Renaut, the Chef and founder of Flocons de Sel, the legendary 3 Michelin Starred restaurant and member of the “Grands Chefs” Relais & Châteaux and “Grandes Tables du Monde”, belongs to a "new generation of chef who re-invent the local products with malice". The chief redactor of the Guide Michelin Juliane Caspar qualifies his style of "very subtle" and find his compositions very "surprising and harmonious". Leading the kitchen of the first restaurant in Oia, Emmanuel, together with the talented Chef de Cuisine George Dospras, could prepare anything less than a Menu based on the unique island’s produce.

The essence of the menu was created aﬅer Renaut’s ﬁrst visit last summer at a magic island, a peaceful place with inﬂuences from the local products, the sea and the mountain, embraced by a team with passion for the best and respect to nature.

Jason Atherton started out working alongside great chefs including Pierre Koffmann, Marco Pierre White, Nico Ladenis and Ferran Adria at el Bulli, before joining the Gordon Ramsay Holdings in 2001 and launching ‘Maze’, first in London and then another five globally. Jason left Gordon Ramsay Holdings in 2010 to launch his own restaurant company, Jason Atherton Ltd. His flagship restaurant ‘Pollen Street Social’ opened in April 2011 in Mayfair and was awarded a Michelin star within just six months of opening. Since then, Jason’s ‘The Social Company’ has grown into a globally renowned restaurant group, with a portfolio of restaurants which include the Michelin-starred City Social, as well as Social Eating House, Little Social, The Betterment and Berners Tavern. Alongside his London restaurants, Jason has also opened critically-acclaimed restaurants in Shanghai, Dubai, St Moritz and his Michelin-starred restaurant, The Clocktower, in New York. Jason has written four cookbooks, appeared on several TV programmes, and is a brand ambassador for a number of brands including BMW, Moët & Chandon and Audemars Piguet Savoir Faire. Emmanuel Renaut is the Chef and founder of Flocons de Sel, the legendary 3 Michelin Starred restaurant of Megève. This village of the Alps of southeastern France is where he invented his incredibly courageous and creative cuisine and his well known tendency to work with wild plants. Flocons de Sel is also a member of the “Grands Chefs” Relais & Châteaux and “Grandes Tables du Monde”. The opportunity to try Chef’s Renault’s cuisine is more than unique.

A native of Versailles, Paris, Chef Gregoire was raised in the Morbihan region of Brittany in France where he has been graduated from the CFA, in Vannes, the prestigious culinary institute. It is no coincidence that Gregoire has become a chef... In Brittany where lands meet the sea, he quickly became accustomed to good food and cooking whilst spending time with his mother and grandmother in the kitchen. An outstanding and diverse career, including other roles at several acclaimed Michelin star restaurants in France to large luxury resorts around the world, also working his craft under Pastry Chef Gilles Marchal and Chef Michael Nave, the right arm of Pierre Gagnaire, and Head Chef of Balzac ***. Since 2014 he is the mastermind of the iconic underwater restaurant, Ossiano at Atlantis, The Palm, Chef Berger drives the menu creation and restaurant operation, whilst overseeing a large team. His eye for detail and innovative and beautifully crafted dishes keeps the restaurant on the culinary forefront, with Ossiano being considered one of the most premium fine dining venues, in the region, but also one of the fastest-growing gastronomic destinations anywhere on the planet. Chef Berger has set the precedent for the culinary scene in Dubai with his innovative ideas and use of exceptional techniques and quality ingredients, which have played a major role in him being heralded as the most acclaimed chef in the city, earning more awards than any other chef over the past four years.

Emmanuel Renaut is the Chef and founder of Flocons de Sel, the legendary 3 Michelin Starred restaurant of Megève. This village in the Alps of southeastern France is where he invented his incredible creative cuisine and his well-known tendency to work with wild plants. Flocons de Sel is also a member of the “Grands Chefs” Relais & Châteaux and “Grandes Tables du Monde”. The opportunity to try Chef Renault’s cuisine is more than unique.

Returning to Greece in 2010, he took over the Perivoli restaurant in Santorini and then served as Executive Chef of the Elounda Peninsula Hotel in Crete for 3 years. In 2012 he wins his first Golden Cap for the Calypso restaurant. In 2015 he was distinguished with 1st place for the Mediterranean zone in the international competition S. Pellegrino Young Chef of the Year. In 2015 he opened CTC, at the same time, he started “Rolling Stove in the fields: Consulting, Private Dining, Events and Master Classes” imparting his knowledge, enthusiasm and inspiration. The 1-Michelin starred Chef likes to liken cooking to painting. As a lover of colors, he parallels an empty plate with a white canvas, which he expects to "fill" with genius and creativity. The chef aims with his creations to "invite" his guests, as he prefers to call CTC customers, to a gastronomic journey where aromas, textures and flavors alternate harmoniously and unabashedly.

Emmanuel Renaut is the Chef and founder of Flocons de Sel, the legendary 3 Michelin Starred restaurant of Megève. This village of the Alps of southeastern France is where he invented his incredibly courageous and creative cuisine and his well-known tendency to work with wild plants. Flocons de Sel is also a member of the “Grands Chefs” Relais & Châteaux and “Grandes Tables du Monde”. The opportunity to try Chef’s Renault’s cuisine is more than unique.

Three times Michelin starred and having obtained the title of Meilleur Ouvrier de France (Best Craftsman in France) in 2004, Christophe Bacquié has been working in the catering department of the Hôtel & Spa du Castellet and the kitchens of the gastronomic restaurant since 1 November 2009. His philosophy: To share, value the work and create cooking values. "Cooking is an art that brings people closer together. For me, conviviality, sharing and bringing people together are key to creating a successful dining experience".

Originally from Sao Paulo, Brazil with Italian family heritage, Rafael commenced his career in London at the age of 21. He then worked in Spain and Italy under the guidance of renowned Michelin/ 50 best chefs like Stefano Baiocco, Quique Dacosta and Martin Berasategui. Rafael then returned to the UK to work with Heston Blumenthal and Simon Rogan. He currently co-owns and runs Da Terra, a creative endeavour in London that gained its first Michelin star within 8 months of opening. A second Michelin star followed in 2020.

Thomas Bühner has been a member of the League of German Top Chefs for more than 20 years. From April 2006 to July 2018, Bühner was the Managing Director and Chef at Restaurant La Vie in Osnabrück. During this time he was also a "Grand Chef" at Relais & Châteaux from 2009 and on. He believes that there is no more authentic and intense flavour than the original one and this is why the basis for all his dishes consists of each ingredient’s natural flavour. Furthermore, Bühner follows low-temperature cooking while his menu is composed like a symphony with purist dishes being juxtaposed with playfully arranged plates.

A Spanish two-Michelin starred chef presents a refined cuisine of rural landscape and seasonality. His work is about a cuisine that is simple yet essential, refined yet generous, sustainable gastronomy in a globalized world. Small things fill him with joy and get him closer to essentiality and to a complete life. Planaguma’s cuisine is a virtuous game of authentic flavors, rich aromas and bold colors.

Emmanuel Renaut is the Chef and founder of Flocons de Sel, the legendary 3 Michelin Starred restaurant of Megève. This village of the Alps of southeastern France is where he invented his incredibly courageous and creative cuisine and his well known tendency to work with wild plants. Flocons de Sel is also a member of the “Grands Chefs” Relais & Châteaux and “Grandes Tables du Monde”. The opportunity to try Chef’s Renault’s cuisine is more than unique.

Bespoke dining experience from the Belgian three-Michelin starred chef of the Hertog Jan restaurant (Brugge, Belgium). For Gert de Mangeleer cooking is all about passion, fun and bringing people together.

Travelling, new ingredients and exchanging experiences drive his inspiration daily. Being a Captain of Gastronomy for Flanders he strives to place Flanders as a culinary destination on a world’s gastronomic map.

An uncompromising perfectionist, a skilled master of haute cuisine the Austrian-born chef Jacob Jan Boerma is persuaded that the key to a successful dish is the best quality produce.

Being chosen as one of the 50 best chefs of the world (Le Chef) and awarded with three Michelin stars, he experiments with new ingredients and cooking techniques, delighting his guests with perfectly balanced dishes.

Emmanuel Renaut is the Chef and founder of Flocons de Sel, the legendary 3 Michelin Starred restaurant of Megève. This village of the Alps of southeastern France is where he invented his incredibly courageous and creative cuisine and his well known tendency to work with wild plants.

Flocons de Sel is also a member of the “Grands Chefs” Relais & Châteaux and “Grandes Tables du Monde”. The opportunity to try Chef’s Renault’s cuisine is more than unique.

Please use the below form to talk to us!